Well Thanksgiving came and went, and we were so busy that I never got around to taking many pictures, which is sad since we had lots of wonderful family in town and I failed to document it. 😦

I did manage to document this awesome cheese ball turkey that my aunt Janet made though!

Joey’s parents came up and stayed with us for a few days, and we had a wonderful weekend together! My uncle Gary and aunt MaryAnn came down this year for Thanksgiving as well, which was nice! And then of course we had our usual crowd, in total I think we had 15 people this year.

Because Thanksgiving came so late this year I started getting itchy to decorate for Christmas before Thanksgiving was even upon us. So the day before Turkey day I cracked and we hung wreaths on the windows of the front of the house. They had just come in the mail, and I was soo excited to get them that we just had to put them up! 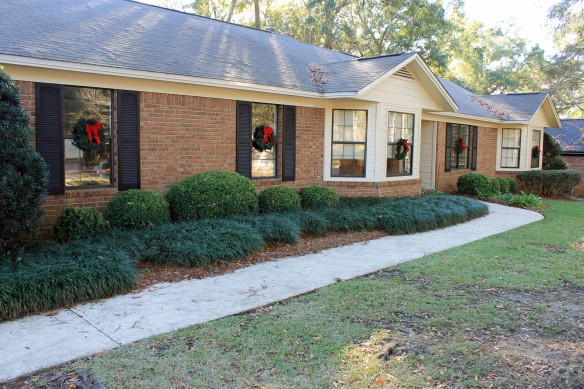 I love this addition, and plan to step it up next year with candles in all of the windows and maybe adding some LED lights to the wreaths.

We also added some net lights to the bushes in the front of the house. At least the bushes on one side of the house…haha. Our house is odd and has no outlets outside in the front or sides, so we’re limited when it comes to putting up Christmas lights. So we decided since it was so late this year to just throw on some net lights and call it a day. Next year we plan to have an electrician come out and install some outlets so we can light the bushes on the other side of the house, and maybe add some icicles to the roofline.

I picked up these luminaries last year at Goodwill, they were really sad and pathetic before they got a nice coat of silver and gold spray paint perked them up!

We didn’t do much decorating at all the first year in the house, we were still adjusting to having Chief, and tired from all the events in 2012. So this year I was really pumped to decorate, and I plan to continue to add a little more each year for the next few years. 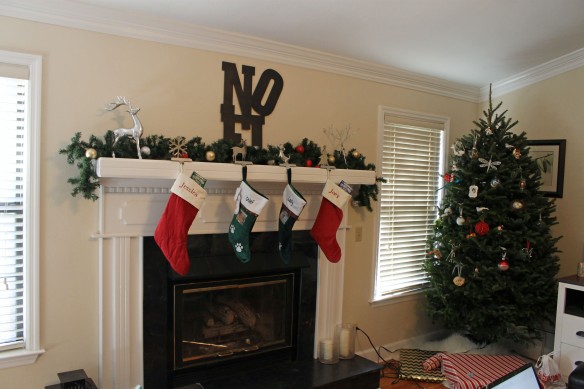 We got the flu in the second week of December though, so we lost steam about half way through. Luckily we got the outdoor lights and the tree lit and indoors before the flu officially hit, but our tree didn’t get decorated until just last weekend. And we didn’t even bother with putting on all of the ornaments…just the ones that we truly loved and have sentimental value with. Partially because we just weren’t feeling up to it, and partially because I didn’t want to put any ornaments too low for fear the dogs would get them.

So far they’ve been ok with the tree, much better than we thought they would be. But they also don’t get much in the way of unsupervised opportunities for destruction, so I can’t give them too much credit. Lady has slinked around the tree a few times which makes me nervous, but so far so good, she’s so agile that sometimes I think she does stuff like that to test her skills. If Chief attempted something like that, the tree would certainly come crashing down and he would wind up twisted up in lights. lol. Poor baby lives his life like a bull in a china shop, and doesn’t know the meaning of the word gentle or grace.

We had our friend Jaclyn take some holiday pictures, she interned awhile back with our wedding photographers that we love, and we were so thankful that she was willing to take some shots of us! Although trying to get our dogs to sit still long enough to be photographed was pretty comical. Lady mostly cooperated, Chief on the other hand took a little more work, and we have some pretty funny outtakes. But Jaclyn was very patient, and took some great shots so we’re very happy and thankful that she was willing to do that for us! We didn’t have any pictures as a “family” so it’s nice to finally have some. We need to work on the dogs with the “stay” command before we attempt something like that again though. 🙂 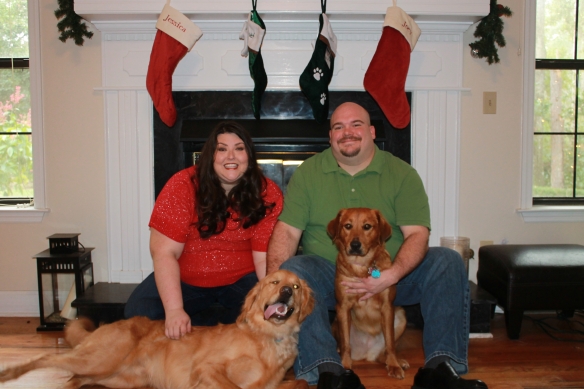 Would have been a great pic if Chief wasn’t being a goober!

That’s about all that’s been going on around here…we’re just gearing up for the holidays! Hope you are all having a safe and merry holiday season as well!! 🙂